One thing has always been clear, Makin’ Steps have always had a close eye on the future and their latest production reflected this with all the elements of talent and quality that Harlow audiences have come to expect. 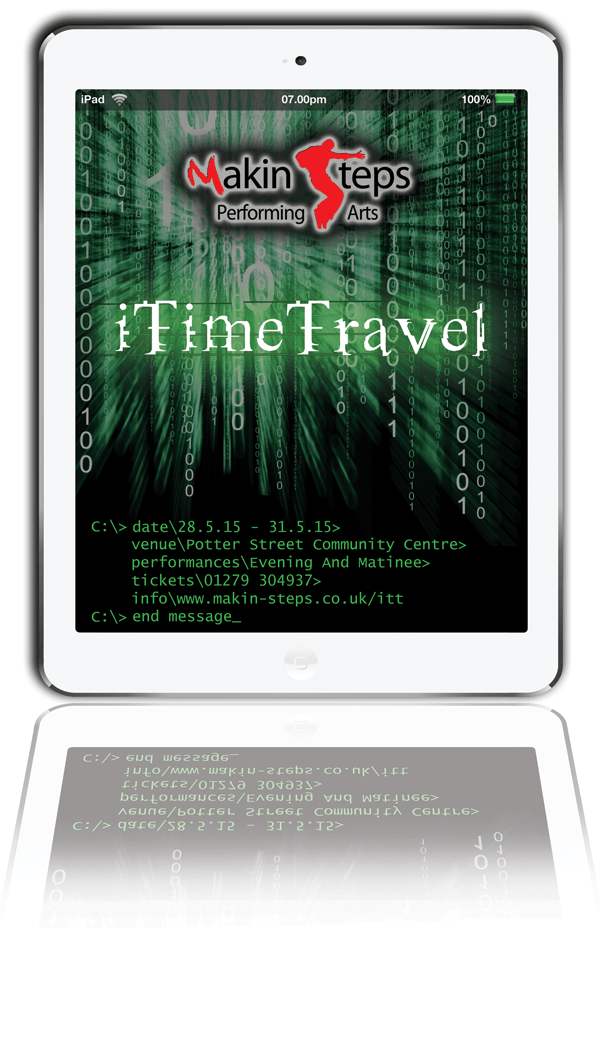 The flexible but cunning narrative centres around two girls, Maisie Humphreys and Abbie Middleton, exploring a new app on their iPad called “iTimeTravel”.

Unaware of quite what this will allow them to do they take a leap into the unknown and travel back through Makin’ Steps past productions to join in with the present ensemble and to take a glimpse of what the future might have in store.

And so the audience are treated to thirty-four numbers over two and a half hours from the company’s extensive repertoire – street dance and hip hop, ballet and tap dancing, musical theatre and quality singing that could grace any professional venue during any era.

In fact, increasingly, it is the quality of the vocals that are drawing me to Makin’ Steps productions and my only criticism is although the dance performers were centre-stage and rightly so, the “backing-singers” could have been more visible. They certainly deserved to be.

A quick glimpse at the programme shows you that Makin’ Steps is very much a family-affair and with the majority of audience members greeting proprietor Margaret Wright with a hug and a kiss it’s very clear who the head of the household is. Don’t upset mum and the show’s guaranteed to be a sure-fire success.

With astonishingly, more than 90 performers involved in this tremendous showcase, it’s hard to single anyone out but the vocals of Hannah Furness (What Now) and Brooke Turnstill (Thinking Out Loud) were particularly impressive. And the choreographers, who are integrated members of the company, should be immensely proud of the work they achieved.

The pièce de résistance was saved for the moment that Maisie and Abbie literally jumped into the screen of the giant iPad and out again. Clearly there are few barriers Makin’ Steps can’t break through – just give them TIME.

What strikes me, time and again when I see Makin’ Steps productions is not just the sheer professionalism of the performances but the reflection of the confidence and conviction shown by Harlow’s young people taking part. They say that Britain has Got Talent. Well, Makin’ Steps is growing it and showing it and it’s something that they and the entire town should be proud of.